The Reasons Behind Cats Hissing

Want to know what it means when your cat hisses? Read on to find out! 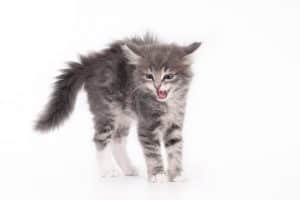 How can you tell the difference between an angry, hissing cat and a happy, meowing cat?

When a cat feels scared, threatened and/or confused they leap up, their eyes go back, their mouth opens, their tongue curls in a U shape, and they hiss at whatever (or whoever) is causing them discomfort.

Do Cats Pretend To Be Snakes?

Ever thought your hissing cat sounds like an angry viper or vengeful Boer constrictor? You may not be far off the mark.

Some cat behavioral experts think that cats originally started hissing to imitate the sound snakes make in an attempt to scare off potential predators.   This is a survival tactic 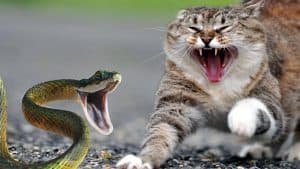 Even though small cats are in the same family as lions, tigers, and leopards, they are significantly smaller and less able to protect themselves, so it’s not hard to believe that many years ago they had to adapt to their environment and find new ways to protect themselves.

Many small creatures that could not win against a larger predator in direct combat have developed other ways of keeping danger at bay. The owl butterfly, for example, has a large eye-shaped spot on their wings look like owls eyes to scare off larger animals that hunt by sight.

Why Do Cats Hiss?

Cats hiss when they’re in pain – for example, if you touch them in a place that hurts or if they accidentally hit their paw. 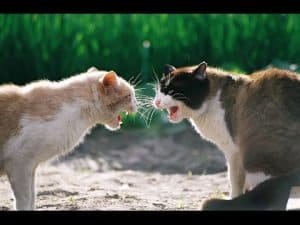 Cats hiss as a warning, as a way of telling whoever is bothering them to back away. Two cats that haven’t met before may hiss at each other as a way of showing that if the other cat ignores the warning there may be a fight.

Cats may also hiss when someone gets too close to their kittens or if a stranger enters their home.