What Junk Food Can Dogs Eat?

We all know junk food isn’t good for dogs or humans, but is it actively harmful for dogs? What if your dog eats some junk food accidently? Read on to find out more. While plain popcorn can actually benefit your dog’s health when eaten in small amounts, popcorn toppings – butter, salt, sugar etc. – are not good for dogs and can lead to intestinal problems and obesity.

The hard corn kernels can also pose a choking hazard, so you may want to keep the popcorn away from your dog.

No, dogs cannot eat ice cream for a multitude of reasons. For starters, dogs are not able to digest milk. Seeing as ice cream is made with milk, it could lead to all sorts of digestive problems.

Ice cream is also full of sugar, which is not good for dogs. Sugar free ice cream is actually worse, because if it contains xylitol instead of sugar it would be toxic for dogs.

While no ice cream is recommended, flavours that contain chocolate are especially toxic. This is because chocolate contains theobromine, a component that dogs cannot process.

No, dogs cannot eat pizza because it contains a lot of ingredients which are harmful for them. Pizza often contains cheese, which is problematic seeing as most dogs are lactose intolerant. 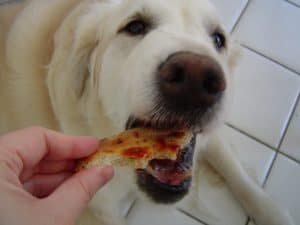 Garlic, which is often found in the sauce, can cause serious health problems in dogs.  Onions can cause damage to your dogs red blood cells and could make them really sick.

Sodium is prominent in pizza sauce, various meats as well as other toppings and is not a healthy choice for dogs.  Oil is another problem for dogs and could make them sick.

Even the crust can be detrimental as it is basically starchy, carbohydrate-heavy empty calories.

No, dogs cannot eat marshmallows. While not all marshmallows are toxic for dogs, they do contain a lot of sugar which is not healthy for dogs.

While the occasional marshmallow might be okay, it depends on the ingredients.   Artificially sweetened marshmallows are actually worse than the sugary ones because they often contain xylitol, which is toxic for dogs.  Check the ingredients beforehand and, if your dog has eaten xylitol, take them to the vet.

While some junk food won’t cause long-term health damage, it’s not really worth the risk. There are a lot of healthier alternative snacks such as some fruits, vegetables, nuts and dog biscuits, so if you want to treat your dog avoid giving them something which could make them sick.