Yes, dogs can eat broccoli in small amounts. Remember that snacks should only make up about 10% of your dog’s diet, so feed your dog small quantities of broccoli now and then but don’t feed it to them all the time. 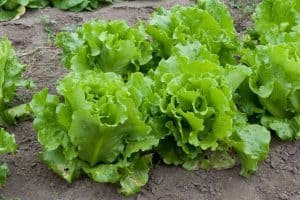 Yes, dogs can eat lettuce as long as it is washed to remove chemicals, it is served on its own (i.e. without dressing), and it is served in small quantities. As with any human food, lettuce should be fed to dogs now and again and should only make up 10% of their diet at the most. 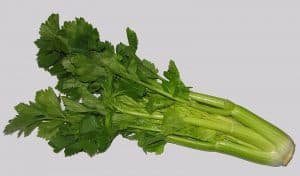 Yes, dogs can eat celery as long as it’s cut up into small, bite-size chunks and the leaves are removed. Too much celery can make dogs urinate more than usual which could be dangerous, but a small amount of celery now and again is perfectly safe. 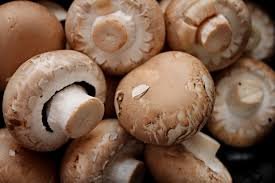 Yes, shop bought mushrooms are generally safe for dogs as long as they are fed in small quantities.  Some dogs may have an allergic reaction to mushrooms, but it’s fairly unlikely. As with any new food, give your dog a small piece of mushroom and check for negative side-effects.

Wild mushrooms, however, can be toxic to humans and dogs alike. If you notice wild mushrooms growing in an area you frequently take your dog, keep an eye on your furry friend at all times and don’t let them eat any of the mushrooms. If your dog does consume a wild mushroom, take them to the vet ASAP. 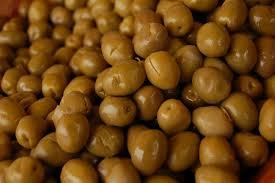 Yes, olives are generally safe for dogs. Make sure the olives are pitted as the stones can get stuck in the dog’s digestive tract and cause health problems. However, olives do have a high salt content and should only be fed to dogs in small quantities. 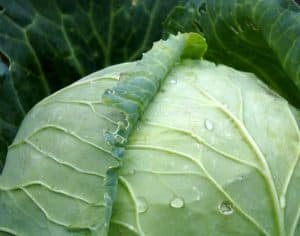 Yes, dogs can eat all types of cabbage in small doses. Rather than feeding your dog a large portion of cabbage, try chopping up a small amount and serving it with their dinner.

Raw cabbage is okay in small quantities, but it contains a compound called thiocyanate which can suppress the thyroid gland is fed in large, frequent amounts, so it’s best to cook the cabbage where possible. 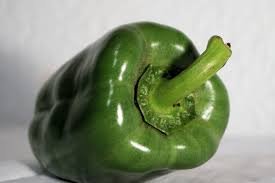 Yes, dogs can eat green, red and yellow bell peppers as long as they are not allergic to members of the Nightshades family. Red peppers are especially high in nutrients, so if you have a choice of colours opt for the red ones.

Green or red chillies, on the other hand, should not be fed to dogs. 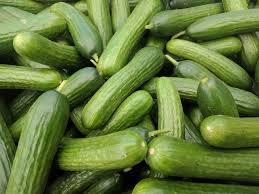 Yes, cucumbers are a safe, low-calorie snack that is fine for dogs in small amounts. Too much cucumber can cause digestive problems in dogs, so only feed them a little portion.

Remember to cut the cucumber into small, bite-size slices. Dogs can choke on whole cucumbers because they often eat too quickly.

Yes, zucchinis are safe and even beneficial for dogs when served in small amounts. Zucchini’s are rich in vitamins, minerals and fibre, plus they have few calories and fat so can be a good snack for overweight dogs.

As with any snack, zucchini should be fed in small amounts and should not become more than a small part of your dog’s diet. Snacks should only make up 10% of your dog’s daily food intake. 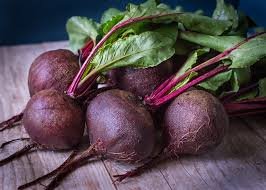 Yes, dogs can eat small amounts of beets, but they are not particularly beneficial. There are many foods that have better national value which your dog may enjoy more, so it’s best to avoid feeding your dog beets if possible.

Raw beets could cause choking and intestinal obstruction, so cooking the beets first is advisable. Beets are also messy and could stain your dog’s coat and face.

Beets are also acidic and can cause problems in dogs who suffer from bladder and kidney stones. They are also rich in carbohydrates, which are not ideal for dogs. 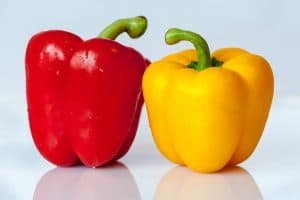 Yes, dogs can eat bell peppers provided they are not allergic to members of the Nightshades family. If you’re not sure whether your dog is okay with bell peppers, feed them a small piece and keep a close eye out for any side effects.

The red peppers have the most nutritional value, but green and yellow peppers are also acceptable. Remember not to confuse bell peppers with chillies, which are spicy and should not be fed to dogs. 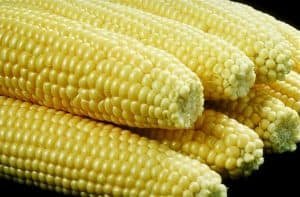 Yes, dogs can eat corn.  Corn kernels can be tasty and healthy in small quantities (as part of a larger meal, for example), but be careful about feeding your dog corn on the cob. It’s not toxic, but it could block your dog’s intestines and cause stomach pain if swallowed whole. 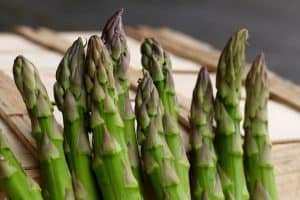 Yes, dogs can eat asparagus if you follow certain guidelines. Raw asparagus is difficult to chew and could cause choking, vomiting and other digestive problems, so lightly cook it before feeding asparagus to your dog.

Don’t use butter or cooking oil as this could make your dog sick; instead steam or boil the asparagus. 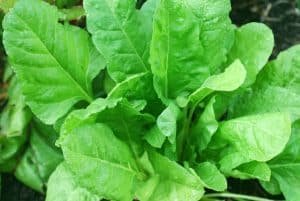 Yes, spinach should be safe for dogs in small doses and may even contain some health benefits. However, too much spinach can lead to health problems.

As spinach is high in oxalic acid, this can stop the body’s ability to absorb calcium which could eventually lead to liver failure.

While your dog would have to eat a huge amount of spinach to be at a realistic risk, long-term consumption of spinach is not recommended. 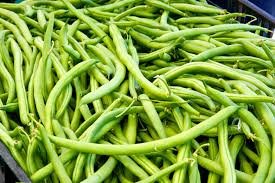 Yes, green beans are a good choice of vegetable when fed in small doses. Green beans are low in calories, high in nutrients and are best served cooked.

Make sure you only serve your dog fresh beans as canned alternatives can have added salt and preservatives. 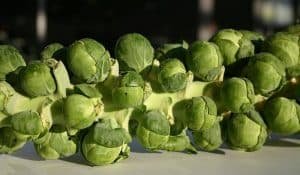 Yes, dogs can eat Brussel Sprouts. Brussel sprouts are rich in vitamins K and C, they have B vitamins, antioxidants and even cancer fighting properties. Brussel sprouts may give your dog gas, but while this can be unpleasant for you it may actually help clear your dog’s colon and promote healthy digestion.

While Brussel sprouts have a lot of positive health benefits, some dogs will simply hate the taste. Try feeding your dog one small sprout and see how they react. If they seem to like it and don’t have any negative reactions, try feeding them around 1-3 Brussel sprouts now and again.

As with any vegetable, Brussel sprouts should only make up a small portion of your dog’s meat-heavy diet.

Don’t try to feed your dog raw Brussel sprouts (which will be hard to eat and pretty unpleasant). Instead, steam, boil or microwave them. Make sure you don’t cook the sprouts with other things, such as spices, salt or garlic, as they are not good for dogs. 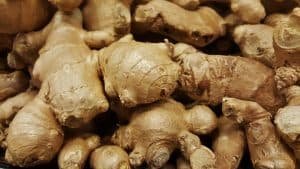 Yes, ginger can be beneficial for your dog.  It can help battle nausea, reduce bloating, sooth arthritis, combat cancer and more.

When feeding your dog ginger, remove the skin and mince the yellow part. The amount of ginger that is appropriate for your dog depends on how much they weigh: miniature breeds should only have ¼ of a teaspoon, dogs that weigh 35 pounds or less should be given ½ of a teaspoon, and larger dogs can have ¾ of a teaspoon.

Ginger has a lot of health benefits, but it can also thin the blood which could be dangerous if your dog is pregnant or about to undergo surgery. 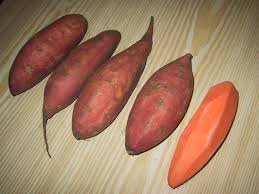 Yes, small amounts of sweet potato can have a range of health benefits for your dog because they are high in dietary fibre, low in fat, rich in vitamin C and vitamin B6, and they contain antioxidants.

Try boiling or steaming the potato and start them off with a small amount as too much in one go could lead to digestive problems. 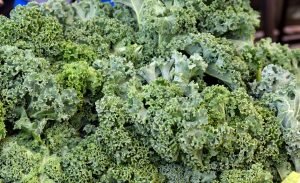 No, dogs should not eat kale.  While it is not toxic for canines, eating kale can lead to health problems such as kidney and bladder stones.

This is because kale contains several compounds, such as calcium oxalate and isothiocyanates, which can be harmful for dogs.

While a small amount of kale is unlikely to cause problems, it’s not advisable as a regular part of their diet because of the associated health risks. 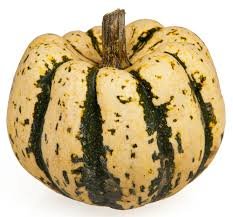 Yes, cooked or baked squash is okay for your dog to eat in small amounts provided you have removed the skin and seeds.

Raw squash can have a bad effect on their digestive system, but cooked squash shouldn’t cause any problems. 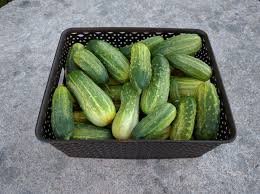 Yes, dogs can eat some types of pickles, but it depends on the pickle. Many pickles are soaked in salt, vinegar and spices, all of which can have negative effects on dogs.

Pickles that are unsalted, un-sweetened and un-spiced are your

best bet, but they might not be particularly appealing for you! If you are going to feed your dog pickle, feed them a couple of slices once or twice a week. Don’t feed them a whole pickle at once as it could make them choke. 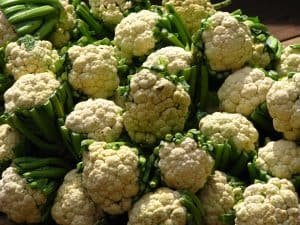 Small portions of cooked cauliflower are safe for dogs as long as you remove the green leaves and don’t serve the cauliflower with butter, oil or spices.

As with any fruit or vegetable, only feed your dog a small portion of cauliflower every now and then, not as part of their regular diet.