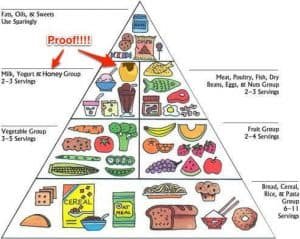 Cats are obligate carnivores, which means they get their nutrients from meat and they need meat to survive. Cats don’t need to eat vegetables, fruits or grains, but that doesn’t mean they can’t eat these foods.

Most of your cats diet should be made up of meat, but they can have the odd treat now and then. Read on to find out which treats are safe for cats and what should be avoided at all costs!

Yes, cats can eat prawns in small quantities. Prawns are okay as an occasional treat, but shellfish should not be a large part of the cat’s diet.

Yes, but cats shouldn’t eat bacon very often. Cats are carnivores and bacon is a type of meat so it’s not that bacon is bad for your cat, but fatty meat can upset the cat’s stomach, plus extra salt and preservatives are not good for animals.

Processed meat is not good for cats, so if you want to feed your cat bacon keep it to a small ration every week and don’t make it a regular part of their diet.

Yes, cats can eat ham in moderation. Ham is high in sodium which, while it doesn’t pose much of a threat to healthy cats, could be an issue if your cat suffers from health problems.

Cats don’t drink much water, so there is a danger that too much sodium could dehydrate them.  Ham is fine as a treat, but it should be limited 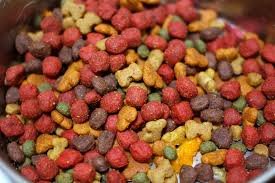 Dogs and cats have different dietary requirements. Cats are obligate carnivores, which means their diet is made up of meat and they need meat to survive, while dogs are omnivores and can get nutrients from animals and plants.

Cats need both linoleic and arachidonic acids to maintain a healthy coat and kidneys, while dogs only need linoleic acid to stay healthy. Cats also need more B vitamin, folic acid, vitamin A and higher protein levels than dogs.

Accidently eating some dog food won’t harm your cat, but if your cat were to stop eating cat food and switch to dog food it would be a problem. Your cat has nutritional needs that dogs don’t have, so dog food will never have enough nutritional value for a cat.

If your cat were to live off dog food for a long period of time, they would suffer from malnutrition and eventually they could die. Your cat is unlikely to want dog food in the first place, but try to keep dog food away from your cat just in case.

Cats shouldn’t really eat pasta, but a small amount probably won’t hurt. Pasta is rich in carbohydrates and contains starches and gluten, neither of which would make up a cat’s natural diet. Cats can’t metabolize this kind of food and, just like humans, they can be gluten intolerant.

Pasta isn’t poisonous for cats so there is no cause for concern if they accidently eat a little bit or if you feed it to them as a one off treat. Cats can eat a bit of pasta every now and then, but it should not be a regular part of their diet. 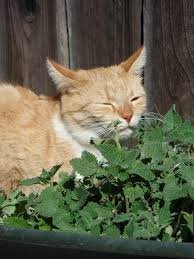 Yes, cats can eat catnip. Eating catnip has a different effect than smelling it; while smelling catnip can make cats hyperactive and a little crazy, eating catnip gives them a laid back, stoned feeling.

Catnip works as a sedative when it’s eaten, so your cat will probably just lie down and fall asleep. Your cat shouldn’t eat too much catnip, however, or it could upset their stomach.

Nuts are not recommended for cats. Most nuts are not toxic for cats, but nuts contain a lot of fat which could lead to serious health problems if your cat eats too much.

Salted nuts are also a problem for cats because too much salt can cause vomiting, seizures and even death. Macadamia nuts are toxic for dogs, so even though we don’t know whether macadamia nuts are bad for cats, you don’t want to feed them some and find out!

Cats can eat peanuts in moderation, but there is a risk that your cat could have a peanut allergy. Peanut allergies in cats could result in the cat swelling up, getting itchy and sneezing, so if you do feed your cat peanuts try out a very small handful (literally a nut or two) to start with.

It’s probably okay if you feed your cat a small portion of nuts now and then, but take it slow, only feed them one or two nuts to start with to make sure there are no adverse reactions, and don’t make nuts a regular part of your cats diet.

Cats can eat a small amount of baked bread or shop bought bread, but they should avoid dough at all costs. Bread doesn’t hold any health benefits for cats and most bread contains preservatives, sugars and salts which are potentially harmful for your cat.

Feeding your cat a small amount of cooked bread now and then is okay, but keep it to a minimum. There is really no reason to feed your cat bread, however, so it’s not recommended.

Uncooked bread dough should be avoided at all costs. If your cat eats uncooked bread dough, it will rise in their stomach and cause a lot of pain. There is also a small risk that eating dough could give your cat alcohol poisoning due to the fermented yeast.

Consuming bread dough could make your cat very ill, potentially even put them in a coma or kill them, so if you make your own bread make sure your cat can’t get anywhere near it.

While small amounts of bread are safe, toppings like butter, Nutella and jam are not and could make your cat very sick. 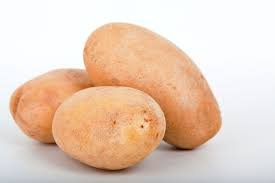 Yes, cats can eat small amounts of boiled, baked or mashed potatoes. Fried potatoes and chips are not very good for cats because they may contain salt, preservatives, herbs and other ingredients that are harmful for cats.

It’s not the end of the world if your cat sneaks a French fry if it’s a one off, but it should not be a regular part of your cat’s diet.

Sweet potatoes are not very good for cats because they find them hard to digest. Too many sweet potatoes can lead to obesity, stomach upsets and vomiting in cats.

Raw potatoes and raw potatoes peel are toxic for cats. If your cat accidently eats some raw potato, you’ll need to rush them to the vet.

In theory, raw chicken should be good for cats. In the wild, cats would eat raw meat so it is a natural part of their diet. Raw chicken is more nutritional than cooked chicken because the natural enzymes and nutrients that is present in raw chicken is lost during the cooking process.

Cats are perfectly capable of digesting raw meat and some owners swear by the health benefits of a raw diet.

Raw meat also carries the risk of food poisoning. You can try to lower this risk by only feeding your cat fresh meat, but raw chicken can become infected with Salmonella or Listeria, both of which can make your cat very sick.