How Long Do Dogs Become Pregnant For? 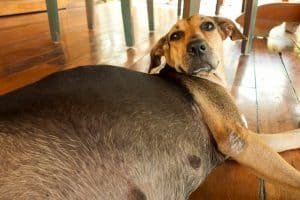 Is your dog pregnant? Do you have questions about the dog pregnancy cycle? Read on to find out more!
How Long Does A Dog Pregnancy Last?

The pregnancy (or gestation) period varies between dog breeds, but it typically lasts around 58 to 67 days. Why do some pregnancies last longer than others? Here are a few factors. 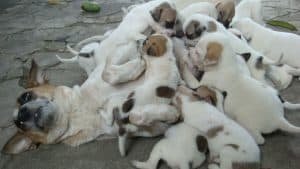 If your dog is pregnant with a smaller litter, she may stay pregnant a few days longer because there’s more room and less pressure on her uterus.

If your dog is pregnant with a larger litter, she is more likely to deliver a few days earlier as the limited room will trigger her labour.

It’s All In The Family

If you know how long your dog’s mother’s and grandmother’s pregnancy lasted, it’s a good indication of how long their offspring’s pregnancy is going to last.

Puppies that are born before the 58th pregnancy day are normally judged to be premature because their lungs may not have had enough time to develop.

Premature puppies often have bright pink paws and less fur than puppies that are born on time. These puppies often die within a few days of their birth, but they have been known to survive.

What To Expect When Your Dogs Expecting 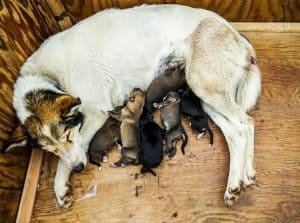 Your dog may experience morning sickness during the early stages of her pregnancy. You may notice a pink discharge from her vagina, which is perfectly normal.

During the first few weeks of her pregnancy, your dog may experience mood changes and a decrease in appetite. During week two, the cells which will eventually turn into puppies begin to grow and the new embryos head for the uterus.

Your dog’s behaviour can vary widely during her pregnancy. She may become more affectionate than usual, but she may also withdraw and want to be by herself.

From weeks four to six, your dog’s appetite should be back and she will normally put on weight. Her teats will grow larger to prepare for milk production. This week is when the babies are most vulnerable, so keep your dog extra safe and avoid rough play.

From weeks seven to nine, your dog’s belly should be swollen and you will be able to feel the puppies when you touch her stomach.

The hair around her belly will start shedding, which is normal and is just your dog getting ready for birth.

Dogs at this stage of their pregnancy will want to nest as they get ready for labour. When she’s due, she will lose her appetite again but try to encourage her to eat at least a little.

When Will My Dog Give Birth?

If you know the exact date your dog got pregnant, you can simply count forward to 63 days later and your dog should give birth around that time.

There are canine pregnancy calendars available online which should help give a fairly accurate indication to when your dog is going to give birth.

If you don’t know when your dog got pregnant, think back to when she was last in heat. Dog’s go through four stages during their heat cycle known as the proestrus, estrus, diestrus and anestrus stages.

The estrus stage occurs in the middle (approximately nine days after the start of her cycle) and this is when your dog is fertile and able to get pregnant.

After the fourth week of your dog’s pregnancy, your vet will be able to perform a sonogram or x-ray to see what size the puppies are and determine your dog’s due date based on that.