Cats Mating – Whats with all the fuss?

You can guess how cat mating works, but how much do you really know? Do you know when the female heat cycle is? How many babies’ can a female cat have? Find out the answers below!

Females in heat exhibit different behaviours than they would the rest of the time. She may become overly affectionate towards everything – objects, furniture, humans, other cats – or she may become un-characteristically aggressive to humans and other cats.

Queens in heat become very noisy and may start yowling all the time. It may sound like she’s in pain, but it’s perfectly normal for female cats to become extra vocal when on heat (even if it is annoying for you!0.

When a queen is on heat, she may lift her tail and back half in the air when you pat her on the back.

She may also be less hungry, urinate on walls and other areas of your house, spend more time than usual licking her genitals, and she may want to go outside all the time because she wants to search for males.

How Do Cats Mate? 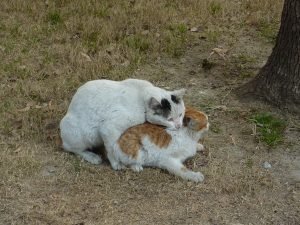 When it comes to the mating itself, the female cat is in charge and she will initiate the action.

Female cats alert the male by yowling and leaving their scent for the male to follow. When the male approaches the queen, she will lay low and list her bum/tail in the air. She will then sway her tail from side to side and may also move her hind legs.

When the male sees this, he knows she’s good to go.

The tomcat will then mount the queen by putting his front legs on either side of her shoulders. It takes a while for the cats to get into this position, but once it’s started the sex itself only lasts a few seconds.

After mating, the female will scream, roll away from the male and often slap him across the face.  This is because withdrawal is painful for the female as cat penis’s have spines on the surface. This is unpleasant, but it makes the female release the egg which enables her to get pregnant. 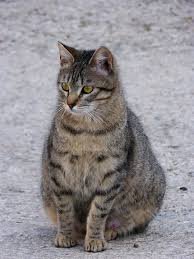 Cat mating season is normally from February to October in the northern hemisphere. Non-neutered female cats (queens) go ‘on heat’ two or three times during the mating cycle.

Female cats in heat seek out tomcats to mate with.  Females will only release an egg (ovulate) after they have mated with a male.

Queens can (and will) mate multiple times a day when on heat, so if she comes in contact with multiple toms it’s likely the female will get pregnant. 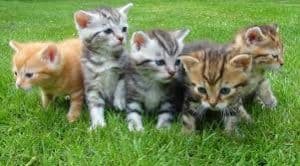 Female cats can get pregnant from the time their six months old right up to the ripe old age of nine years.

Non-neutered females can have three litters of babies a year. The average litter has around four kittens, but cats can give birth to just one baby or up to nine kittens in one go. That’s a hell of a lot of babies!

Tomcats don’t go into heat the way queens do, but they do pick up the scent of female queens when they are in heat. When they become aware of an eligible lady, they will begin searching for her. If there is competition, the toms will fight for the right to mate.