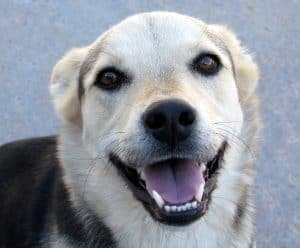 Dogs look like they’re s miling all the time, but do dogs really smile when they’re happy? Read on to find out!

According to Elizabeth Marshall Thomas, author of The Hidden Life of Dogs, dogs do indeed smile. Their faces become relaxed, their lips part and open, their chin is high, their eyes are half closed and their faces appear friendlier, just like human faces do.

Some dogs even grin, bearing their teeth like they’re posing for a photograph.

Why Do Dogs Smile?

When a dog is calm and relaxed, her body will relax too. Her facial muscles won’t be tense, which means her mouth will open and the corners of her mouth will be turned up.

This, by all appearances, is a smile of contentment. 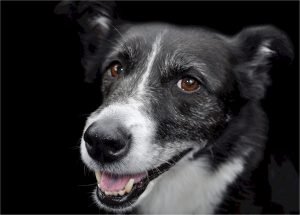 For dogs, smiling is often used as a submissive, nervous or appeasement gesture which they use to show they’re not a threat.  They may smile to make you feel at ease, to make a new friend, or if they want to make it clear they’re not going to challenge your position in the pack.

However, if a dog’s lips are open, their teeth are bared, their body is erect and they’re growling, the dog is not happy and you should back away.

Do Dogs Learn To Smile?

Dogs have evolved alongside humans for hundreds of years and during that time they learned how to get on with us.

Dogs learn by classical conditioning and reinforcement, so if they get a reward for a certain behaviour they’ll soon learn to keep doing that behaviour.

Dogs may have learned that smiling at humans makes them happy and will be rewarded, by affection, treats and attention.

Why Do Dogs Smile?

If your dog smiles at you, it may be because he knows you want him to. It doesn’t mean he isn’t happy or pleased to see you, but dogs have adapted to please humans by exhibiting the traits they know humans like. 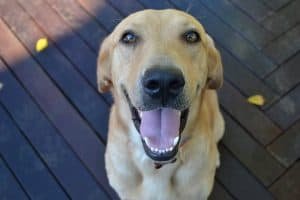 After a while, your dog may associate smiling with the happiness he feels when you rub his belly, give him a treat, take him for a walk or give him attention.

When this happens, your dog is actually smiling because he’s happy.

Some dogs also smile when they want to attract a new owner, such as at an animal shelter. Again, those dogs know that humans like smiles and want to show you that they’re friendly and un-threatening. 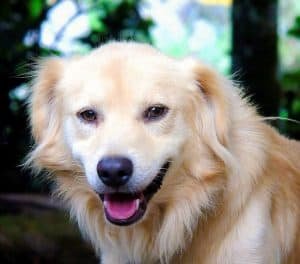 When dogs smile at each other in the wild, it’s a sign of submission. They are trying to show they’re not a threat, they don’t want to challenge the hierarchy of the pack, and they just want to blend in.

Dogs use this behaviour around humans in the same way. Humans tend to like it when dogs smile at them, so they may unintentionally reward the behaviour with praise, treats and affection.

Dogs learn through conditioning, so when they realise this submissive behaviour gets rewards they will keep doing it.

Eventually, the dog may associate smiling with positive feelings and could end up smiling because they’re happy, just like humans do.