Are Canines Able To See In The Dark?

Ever wondered if dogs can see in the dark? How different is dog eyesight compared to human eyesight? Read on to find out! 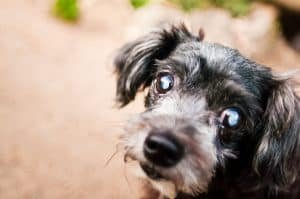 Can Dogs See In Total Darkness?

Dogs can’t see in total darkness, but they can see well in dim light. Dogs can see around five times more in dim light than humans can, which makes it easier for them to notice things after hours.

How Do Dog Eyes Work?

Dogs have larger pupils which can capture more light, but that’s not all. The eye contains two kinds of photoreceptor cells known as rod and cones.

Humans have more cone cells, which work best in bright lights and help us distinguish colour, while dogs have more rods which are better at seeing in the dark and differentiating between shades of grey. 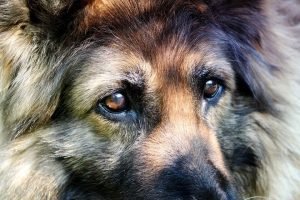 Dogs are also able to detect smaller movements much easier than humans because their rods are better at picking up motion.

They also have a tapetum, which is a mirror-like membrane at the back of the eye. It can reflect light that got away the first time by reflecting it back into the eye, which allows them to see more in the dark.

Dogs do see colour, but they see fewer colours than humans do. The cone cells in our eyes allow us to see colours and most humans have three types of cone cells.

If a person is colour-blind, they often only have two of the three cone cells. This means they see fewer colours than someone with regular vision.

Dogs also only have two kinds of cone cells. They can see yellow, blue and grey, but other colours may be blurred.

Green and orange would seem yellow-ish, purple would seem blue-ish, red may seem black or dark grey, and so on.

Many dog toys are sold in red colours, but this can be a problem for dogs. Dogs find it hard to differentiate red from green, so if you throw a red toy in the grass your dog may have a harder time seeing it than if it was a blue or yellow toy. 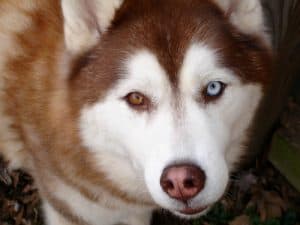 Dogs have developed eyes which can track fast movements from further distances, which makes it easier for them to hunt in the wild. As a trade-off, they don’t have the same 20/20 vision as humans with good eyesight.

Dogs have roughly 20/75 vision, which means dogs need to be 20 feet away from something to see the same details that a human could see 75 feet away. Where you see details, your dog will see softer blurs.

Dogs do, however, have a larger field of vision.  Dogs have a 250 -degree field of vision, while humans only have around 190-degree vision. This means dogs can see more than humans can.