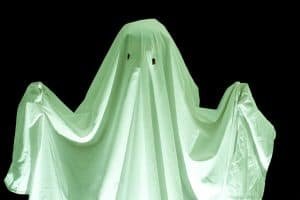 It’s silent, it’s late, and you’re alone in the house with your dog. Suddenly, you hear a growling sound. It’s your dog growling at the wall. There’s nothing in front of, behind or to the side of the wall, but your dog appears to be looking at something you can’t see. And it’s freaking him out.

Is your dog really barking at a ghost? Read on to find out!

Is My Dog Seeing Ghosts?

We know dogs can detect things humans can’t.  It’s true that they can smell fear and may react very badly to someone who is afraid of dogs.

Dogs also seem to be able to tell when someone is a potential threat and will do what they can to protect members of their pack. 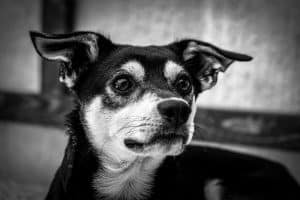 But can dogs see spirits, ghouls, and members of the undead? There are hundreds of anecdotal stories saying that they can.

People talk about dogs who refused to enter houses where people died, reacting strangely to areas where murders have been committed, apparently looking at and even interacting with things humans can’t see, and discovering buried items that had been lost for years.

Some people also believe dogs can see the ‘angel of death’ or the grim reaper, because they have been known to behave strangely, i.e. barking, appearing afraid, or reacting to things that aren’t there, right before someone dies.

How To Tell If Your Dog Has Seen A Ghost

If your dog is seeing ghosts, they may exhibit some of the following behaviours:

How Can Dogs See Ghosts?

Whether or not you believe that your dog can see spirits depends on your own beliefs. If you believe in ghosts, it makes sense that dogs would be able to detect them more easily because of their heightened senses.

Dogs have superior night vision to humans. While they cannot see in complete darkness, their eyes can utilise existing light far better than human eyes can so they can see more with less light. Dogs can also see some ultra-violet light; which humans cannot see.

Therefore, if ghosts are invisible to the human eye, it would make sense that dogs could see them.

Your dog also has a much more powerful sense of smell – around 1,000-10,000 times more sensitive than a human nose. 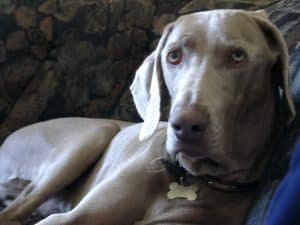 They can also hear higher frequencies than humans, ranging from around 67 Hz to 45 kHz and they can hear sounds four times further away than humans can.

Your dog can see, hear and smell things that you can’t, so it makes sense that they would notice entities that we can’t detect.

Some people believe dogs can detect changes in the atmosphere and know when bad weather is coming. For example, some dogs seem to know when an earthquake or natural disaster is going to take place.

Unlike humans, dogs don’t have religious or spiritual belief systems and so they wouldn’t be trying (or trying not to) see ghosts. They simply react to the things they notice.

Having said all that, no one has managed to prove that ghosts exist and probably never will.

If you don’t believe in ghosts, there are other explanations for dogs appearing to notice things we can’t see.

As dog’s notice things we don’t notice, they also react to things we wouldn’t react to. For example, a dog may bark for ages if they smell a cat, they might spend ages playing with a beetle and they might be afraid of a chair shadow.

Dogs might also hear a creaking door and think someone’s in the house. If they’re outside, they might be reacting to animals, smells and small movements that we haven’t noticed or simply wouldn’t care about.

From this point of view, dogs act weird because their dogs, not because they’re communicating with the beyond.

Dogs have been known to ‘sense’ when something bad has happened in a certain location, for example they might avoid or bark at a spot where someone died or refuse to enter a house where people were murdered.

If you believe in ghosts, you might take this strange behaviour to mean that they have noticed a spirit or detected a bad feeling in an area.

However, dogs also follow their owner’s reactions more often than you might realise. If you seem perturbed by a certain place, your dog may well sense something is wrong and act accordingly.

Dogs also use their superior senses to find wounded or dead people in crime scenes and after natural disasters. This is due to their training and heightened sense of smell rather than the spirits of the dead leading the dog to their body.

The heightened senses of smell, sight and hearing that dogs have can be used to explain how they would notice spirits from the beyond.

However, your dog could just be barking at an insect, at the cat outside, or at a shadow. Ultimately, you don’t know what your dog is experiencing because you can’t read their mind.