Can Dogs Get Hiccups

Wondering whether dogs get hiccups, how they get hiccups and how to get rid of them? Read on for all the info! 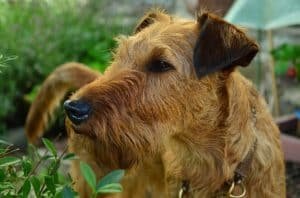 Hiccups are caused by a dome-shaped muscle at the bottom of our chest called the diaphragm. When we inhale, the diaphragm pulls air into the lungs.

When we exhale, the diaphragm relaxes and allows air to flow out of the lungs and out of our nose and mouth. The diaphragm is pretty damn important.

If the diaphragm because irritated, its rhythm goes out of sync, it won’t pull the air down properly, and it begins to spasm. When all that air hits the voice box, the vocal chords close and causes a ‘hic’ noise. While it may sound quite scary, hiccupping is perfectly normal and harmless.

Yes, dogs can hiccup just like humans can. In fact, pretty much any anima that has a diaphragm can get the hiccups.

Are Hiccups In Dogs Normal?

Watching your dog hiccup for the first time can be quite unnerving, but hiccups are perfectly normal and harmless. They are most likely caused by eating or drinking too quickly, feeling over excited, or being too energetic. Hiccups go away by themselves most of the time.

What Causes Hiccups In Dogs?

No one can say for sure what purpose hiccups are meant to achieve or why we evolved to hiccup, but we do know some factors that make hiccupping in dogs much more likely. 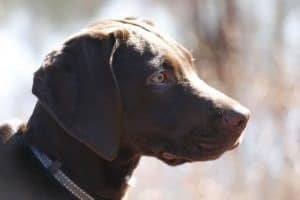 Eating or drinking too quickly is the main cause of hiccups in both humans and dogs. When we eat or drink too quickly, we are more likely to swallowing air, which can cause hiccups.

Puppies are much more likely to hiccup than adult dogs. Puppies even get hiccups in the womb! Some scientists believe that hiccupping helps the growth and development of lungs in baby dogs. According to this theory, puppies will hiccup on and off until their lungs are fully adjusted. There may be some truth in this given that dogs aged on year or older don’t tend to hiccup, but it’s never been proven.

Over excited or stressed dogs are more likely to hiccup than calmer dogs. As puppies tend to be more excitable, it’s more likely they will get hiccups instead of an older dog who’s just chilling out.

If your dog accidently eats something spicy, he might get the hiccups!

While hiccupping in itself is harmless, the diaphragm can contract for more serious reasons. Lesions in the nervous system, Asthma and other respiratory illnesses, cardiovascular problems, hypothermia and other illnesses can cause hiccups. If your dog hiccups frequently, especially if they are over one year of age, you may want to consult your vet to make sure nothing more serious is going on.

What Should I Do If My Dog Starts Hiccupping?

Hiccups can be unpleasant while they’re going on, but they are normally nothing to worry about and should clear up by themselves in a few minutes.

If you want to intervene, or if you dog keeps getting hiccups, there are some things you can to try and stop them.

Give Your Dog A Drink Of Water

Remember when you were a kid and your mum used to give you water when you got the hiccups? Drinking water can stop hiccups in dogs and humans alike, although make sure you only offer a moderate amount of water.

Allowing your dog to drink too much too quickly may have caused the hiccups in the first place!

Massaging your dog’s belly can help, especially if your furry friend is anxious or stressed out.

Some people swear by using fear to get rid of hiccups, but that’s not a very good idea when it comes to dogs. However, you can increase your dog’s breathing or heart rate in more human ways. Try playing a game of fetch or taking your dog for a walk to alleviate hiccups.